THE YOUNG DOMESTIC GODDESS AT BRUNCH

I mean, it’s called the Ultimate Sunday Session for a reason. I don’t know what it is about bottomless booze, but it seriously just makes brunch even better. I don’t now if it’s the fizz going straight to my head or my tastebuds leaving the room after several glasses, but the knowledge that I can just raise my hand and prosecco will magically appear fills my already brunch-obsessed brain with even more happiness. Add to these endless glasses of goodness the non-stop live piano tunes performed with boundless gusto and you’ve got Sunday’s at The Piano Works.

For those who haven’t experienced the joy of The Piano Works as yet, here’s the 411 (does anyone say that any more): the bar and restaurant is centered around a stage where live musicians play requested tracks from the audience, all day. On Sundays, the stage is held by two pianists who swap between tunes providing a constant flow of beautifully played music. From The Champions League entry song (yep, seriously) to Bruno Mars and even The Weeknd, these amazing musicians bring that live music atmosphere to life. 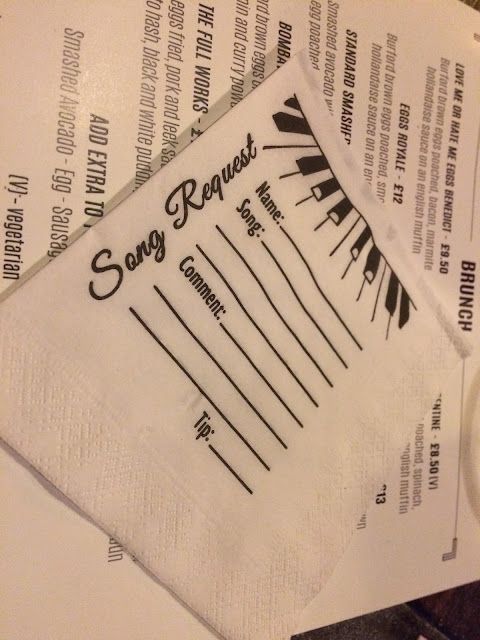 We visited last Sunday to enjoy their new bottomless brunch. Naturally, we began with the booze: guests can choose from two hours of bottomless prosecco (£15pp) or unlimited Bloody Marys (£20pp). If you’re hitting up with the team, I recommend going for the DIY Bloody Mary box for £120, filled with everything you need to create your own customised cocktail. Being as fancy as we are, we went for the endless prosecco.

We it came to food, we went for the classics: eggs and salmon for me, a full fry-up for Alex. Of course, things were not as simple as they seemed. My dish came laden with ribbons of beautifully smoked salmon, three perfectly grilled slices of sourdough toast, gorgeously rich and buttery scrambled eggs (probably four in there) and a sprinkling of fresh rocket. I also added a side of chunky avocado with plenty of chilli as, well, why not. This plate was certainly impressive and was the perfect partner to the prosecco.

Instead of the all-meat version, Alex actually went for the veggie fry-up which was rather good. Two perfectly fried eggs (look at those yolks!) came served with two veggie sausages, plenty of baked beans, grilled cherry tomatoes and a hash of onions and mushrooms. See, a veggie breakfast can still be brilliant! I think it could have done with perhaps an extra element of bubble and squeak or a hash brown, but it was filling and wonderfully tasty.

Between our ‘mains’ and dessert, the lovely restaurant owner treated us to strawberry and cream mocktails which were honestly divine! Obviously, gin is always a great addition but for a mocktail this was pretty great.

As it was Sunday (and I’m greedy), we opted to have dessert. I chose the chocolate mousse pudding with sugary whipped cream and chocolate sauce. The set mousse came topped with a rich chocolate ganache and shards of white and dark chocolate for even more indulgence. Alex chose the tiramisu (his favourite), which came served in a cappuccino-style cup. The tiramisu was more sweet than bitter so could have maybe done with an extra shot of coffee (to wake us up from the prosecco dreams), but generally was nice.

Overall, I really enjoyed our time at The Piano Works. I was concerned that, because the appeal is the music, the food would be less of a focal point for the restaurant and bar. But this was not the case. The portions sizes are great, particularly on my eggs and salmon, and were also reasonably priced - nothing was more than £15. Dessert is a must but I would go with the chocolate over the tiramisu. All that said, the best part of The Piano Works is absolutely the live music. We were up and dancing with complete strangers after our brunch, which was hilarious and emblematic of the fantastic atmosphere in the space.

Sorry, that page does not exist.

Get your Free COcktail

Enter your details below and we'll send you your QR code so you can claim your free cocktail next time you visit.